What sleep apnea means for women

It is estimated that about 20% of the population suffers from sleep apnea1 – the condition that causes people to snore and repeatedly stop breathing during sleep. Although it was once believed sleep apnea was mostly found in men over the age of 40, this is not necessarily true.

Evidence shows that women are almost as likely to suffer from sleep apnea1, but their risk factors, symptoms and diagnosis can differ somewhat compared with males. What is concerning is that it is significantly less commonly diagnosed.

One of the reasons for the underdiagnosis of sleep apnea in women is that it often presents with different symptoms compared with men. Where the typical male presents with snoring and paused breathing during sleep, women are more likely to speak about sleeplessness, morning headaches and fatigue. These symptoms can be mistaken for other conditions other than sleep apnea, resulting in women often being misdiagnosed with something else.2,3

Not only do women tend to present with different symptoms, but studies also suggest the underlying characteristics of their sleep apnea differ too. Typically, women with sleep apnea will have greater flow limitation and more frequent sleep arousals than men2, as well as a lower apnea-hypopnea index (AHI) and shorter apneas.4

It has often been suggested that while women snore, they do not like talking about it and do not report snoring when consulting a professional for sleep health issues. If there was less stigma around snoring among women, chances are that sleep apnea would not be as underdiagnosed as it currently is.

It is especially important for women in high-risk groups to consider their risk of having sleep apnea if they experience poor sleep. Population studies show that the prevalence of sleep apnea triples in post-menopausal women and is also more likely to affect pregnant women.5

The most widely recognised treatment option for sleep apnea is CPAP therapy: where a regulated flow of pressurised air is used to keep the tissues in the throat from collapsing and obstructing airways. But until recent years, gender-specific CPAP therapy that responded to the different therapeutic needs between men and women with sleep apnea did not exist.

When ResMed became the first company to develop a female-specific algorithm for sleep apnea, the goal was not only to improve therapy for women with sleep apnea but also to increase awareness and acceptance of the condition among women in general.

While there have been improvements, the fact that sleep apnea still frequently goes unrecognised in women means there remains an urgent need to continue discussing gender-specific symptoms and how sleep apnea should be diagnosed and treated differently to men.

Sleeping problems? Find out why here.

Our online sleep assessment gets to the bottom of your sleeping issues and offers solutions. 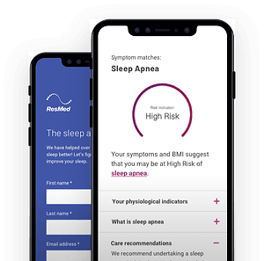