For almost everyone working at ResMed, sleep defines our lives. We know how important it is. That doesn't mean we always get as much as we like, though. It may seem ironic, but no one is 100% immune to problems with sleeping.

'One of my cats also has a peeing problem, which meant we rarely had a peaceful night's sleep'

My husband and I had a few issues getting to sleep when we allowed the cats to sleep with us. One of my cats has a peeing problem, which meant we rarely had a peaceful night's sleep. We'd always worry about whether she was going to pee on us – which she's done plenty of times!

We thought we solved the issue by locking both cats out of our bedroom, but our other cat has an attachment issue and always wants to be with us. When we let them in at night, I would experience fatigue the next morning. Sometimes I'd have a headache or two, and I just felt drained. Most days, I craved an afternoon nap to make up for the lack of sleep at night.

It came to the point where we just couldn't get a good night's sleep. We had to force ourselves to ignore their cries and keep the door locked AT ALL TIMES! They would scratch the door down for ages most nights. Eventually, they got used to it, and it has reduced.

Whenever I have to get up early for a flight or an important meeting, I struggle to sleep the night before. My brain goes into overdrive, thinking about the next day. Eventually, I drift off to sleep, but I always wake up groggy in the morning.

The good news is that I've started to learn that these events are often not worth stressing over as they've usually worked out fine. Recently, I've told myself to stop overthinking about the next day and just go through my regular bedtime routine.

While that's one challenge solved, my wife and I do have three kids all under six years of age. It's a rare night if we each do not have to get up many times to tend to one or all the kids. We've even invested in upgrading to a king-size bed because we often found ourselves with extra little humans in our bed during the middle of the night! As much as we would like to put them back in their own beds, sometimes we just don't have the energy to fight that battle. 'From chirping crickets to a leaking tap or ticking clock, my ears will pick up sounds that others often won't'

From time to time, my brain goes into over planning mode whenever something 'big' needs to happen – be it at home or at work. All the what-ifs and maybes circle in my mind and prevent me from settling down.

To manage all the stress and anxiety, I play a mind game. I imagine myself scribbling all the possible outcomes down on a blackboard and then slowly wiping each of them out. I can usually fall asleep before I've finished. Yes, the list is that long!

My sensitive hearing is also to blame for keeping me awake in the past. From chirping crickets to a leaking tap or a ticking clock, my ears will pick up sounds that others often won't. I'll then have a compulsive need to fix whatever is causing those sounds before I'm able to settle.

'Seriously, this is meant to be on a restful holiday. How am I stressed to the point where I can't sleep?'

When I was studying, it took me years to learn that staying up late to get things done did not work. Too many times after struggling on some task, I would wake up the next day and get it done in a fraction of the time. From then on, I tried to prioritise my sleep.

Now when I struggle to get to sleep, it is often the same culprit – stress. One of the times I couldn't sleep, I was actually on holidays. I wanted to blame the jet lag, but it had been at least a week since arriving, and I was sleeping fine. I remember thinking, "Seriously, this is meant to be on a restful holiday. How am I stressed to the point where I can't sleep?"

As the hours passed by, all I could do was take a visitor's brochure for the region and started penning down my thoughts. I wrote in the margins and on the blue sky of the landscape images – if there was space, I wrote! Exhausted at about 5am, I got some sleep. I remember having a few more awakenings that holiday, but I'd just get up, write a few lines on, and get back to bed.

What these stories tell us

We know trouble sleeping can mean lots of things to different people. It includes having a hard time getting to bed, as well as waking up early and not being able to fall back to sleep.

And just like everybody else, ResMed staff have problems with their sleep too. It can be because of pets, children, noise or stress. While every person's sleep story is unique, poor sleep almost always leaves us feeling tired and stressed.

We hope you could relate to these sleep stories. Perhaps there was something new that you learned. At the very least, these stories tell us that having problems sleeping is entirely normal. You just need to find a way to fix it.

Learn about any sleep issues you may have and how best to improve your rest. 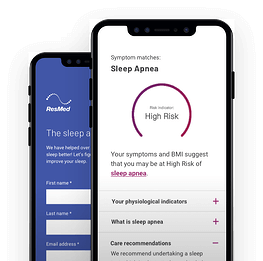 Source: 7 amazing things that happen to your body while you sleep. Queensland Health.